Parksmania / News from Italy / Mirabilandia: video about the artworks of “ispeed”

Video interview about the news of the 2009 season in Mirabilandia (italian language). During the video you can see the artworks of the track, the station and the area of the coaster 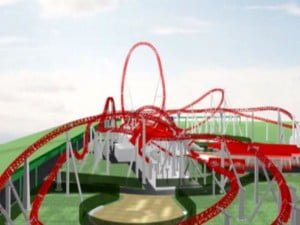 Lanciotti told us about the novelties of the 2009 season: the Intamin Rocket Coaster "iSpeed", a new 3D film ("Robots of Mars"), a new show in the theatre and, of course, "Reset", the Shooting Ride that opened late during the last season.

The works of "iSpeed" are in progress (it will open in June) and during the interview it is possible to see some of the artworks of the coaster (area, station, track), with a hi-tech style, inspired to the Formula 1 world.