28th March 2015 – Gardaland inaugurates the new vertical plunge rollercoaster. The first Dive Coaster in Italy and the longest one in Europe 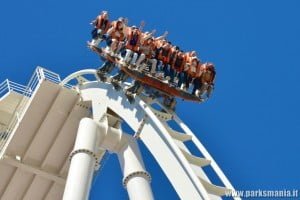 42.5 metres in height, a speed of almost 100 km/h, a vertical plunge descent - 87° of inclination - towards a mysterious space-time passage, tailspins and , head-over-heels upturns, 360° rotations: those are the first, effective key words to present Oblivion - The Black Hole, the new vertical plunge roller-coaster, the first in Italy and the longest ones in Europe.

A 566 metre long track that will lead the most fearless Guests into a new dimension where – for one hundred seconds of pure adrenaline – contact with reality will vanish… a breath-taking experience with no equals!

“Over 20 million euro of investment for an area of over 13,000 square metres, almost like the wing surface of as many as 25 Boeing 747 Jumbo” – affirms Aldo Maria Vigevani, CEO of Gardaland srl . “Made by Swiss B&M (Bollinger & Mabillard Inc.) Oblivion - The Black Hole saw the collaboration of six different firms from six different European countries that have worked at the project for over two years. What better way to celebrate 40 years of Gardaland?”.

The white colour of the track of Oblivion – The Black Hole, a very original choice for a rollercoaster, and the orange of its trains – designed and built to resemble space vehicles – stand tall over every other attraction of the Park, inside an area themed in NASA style. But it is mainly the “Black Hole”, the core of the Oblivion experience, that attracts the sights of Guests. Besides the mouth of the tunnel one can spot some truly unusual elements, completely distorted and sucked in. It looks like they have been “dragged” inside the conduct, almost “swallowed”: part of the roof of a saloon, a windmill, a little cart, a water tank, 3 TV aerials and the van of a TV crew that had arrived on site to document the strange phenomenon… Everything appears deformed by the powerful gravitational force generated by the “black hole”, a powerful enough field to swallow everything inside.

The story narrates of a mysterious spiral standing still in the sky above the Park. An unusual vortex has swallowed in everything: aerials, vans, parts of a western saloon… Everything has been taken away. A TV crew immediately arrived on the scene of the “crime” to capture video footage of the passage of this “fury”. A group of scientists started working on explaining what had happened: the spiral became a black hole, a space-time conduct joining Planet Earth to an unknown location. It is now time, however, to recruit new troops! Everyone will undertake their mission into the unknown. For lovers of thrills and strong emotions, it will be like experiencing a launch into space! Only for true daredevils, from 140 cm in height to 99 years of age!

Invented and planned by Merlin Studios in collaboration with the Art Department of Gardaland, Oblivion - The Black Hole was made using the most advanced technologies but also with important contribution of specific professional figures: engineers, architects, designers, sculptors, audio/video technicians, carpenters, painters, experienced blacksmiths… a joint effort of several firms to put together a great attraction.

Merlin Entertainments has decided once again to pick Italy for an important investment of the Group. “Gardaland is not only Italy’s number 1 Theme Park, it is also one of the biggest Amusement Parks and one of the biggest businesses of the Merlin Entertainments Group; - says Nick Mackenzie, General Manager of the Theme Park and Resort Division of Merlin Entertainments - For this reason it is essential to keep investing, today and in the future, in the continuous growth of this entity. This is why we have decided that the Italian market deserved – four years after Raptor - an important investment for an attraction that could have a strong emotional impact on our Guests.”

From the 28th of March Gardaland will be open every day from 10 AM to 6 PM and with extended opening hours until 11 PM from the 20th of June until the 13th September. To make the season even more attractive the Park has put together, once again, a wide array of advantageous offers and fantastic opportunities starting from the three types of season pass: One at € 52, Premium at € 62 and VIP at € 72, which, starting from this year, will renovate ensuring new and exceptional advantages for the family and for adrenaline lovers along with extremely interesting discounts on entries to Gardaland SEA LIFE Aquarium. Every pass grants access to the Park every time you wish, with no limits in terms of frequency, from the 28th of March till the 1st November 2015!

And also… several online offers! On www.gardaland.it you will be able to purchase a ticket at the super discounted price of € 29.00 choosing 7 days before the date of your visit. Also on offer there will be super-convenient family tickets for groups of 3, 4 and 5 people with children under the age of 10. The price of the family ticket is of 30.50 euro per person. You may also receive a voucher that allows you to purchase one meal at the surprising price of € 8.00. And let’s not forget about the combined tickets that grant access to Gardaland and Gardaland SEA LIFE Aquarium at a truly special price.