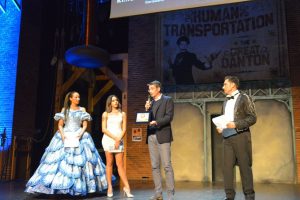 At Parksmania Awards 2016 (*) - the Oscars of Entertainment awarded by Parksmania.it, the first Italian online journal of the sector - Gardaland won the prize for Best New Family Attraction of the year: KUNG FU PANDA MASTER.  The motivation for the prestigious prize was: “A famous animation brand coupled with a family-friendly rollercoaster: those are the perfect ingredients for an involving and fun experience that fits in well with the themed setting where it has been collocated.”

KUNG FU PANDA ACADEMY, the brand new attraction for 2016 of Gardaland, is a large themed area dedicated to families, made thanks to an agreement signed with the American giant DreamWorks Animation, the production studio that gave birth to the trilogy of the most beloved panda of the silver screen. An out and out Chinese-style village – with attraction, interactive games and animation – where one can relive the magic of the world of Po the panda, emulating his heroic feats. How? Thanks to Kung Fu Panda Master, the new rollercoaster for families, suitable for everyone, offering an adventure among descents and fun rotations, which will allow its riders to develop the courage of true “Dragon Warriors”.

Receiving the prestigious award was Luca Marigo, Gardaland’s Director of Marketing & Sales, who declared himself “proud of the success that this new themed area has achieved among its visitors: KUNG FU PANDA ACADEMY is a heavily characterised world full of attractions. This year we have decided to cater to families – our most relevant target – in collaboration with DreamWorks Animation, aware of the strength and the continuous evolution of the world of cartoons, where DreamWorks is definitely an undisputed leader!”

(*) The Parksmania Awards are the Oscars of Entertainment, the prizes that, for the last 15 years, have been awarded by Parksmania.it – the first Italian online magazine dedicated to Amusement Parks - to Italian and European players who have been shining throughout the season for specific initiatives in the amusement sector. As per tradition, several are the categories and the special prizes awarded this year in an event that saw the presence of a multitude of representatives from the Amusement Industry of all Europe.